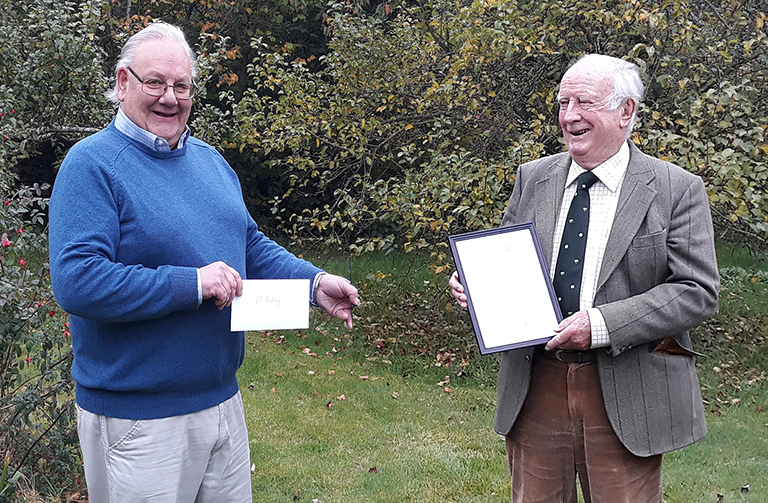 We are delighted to announce that JR Bradney is this year’s recipient of the trust’s Ploughlands Legacy Award. Presented annually, this award recognises the significant contribution made by an individual or group to the conservation of the rivers and lakes of the River Eden catchment.

J.R. (Bob) Bradney has looked after Eden’s rivers ever since he first became associated with the Eden Valley 65 years ago. He came here because of the river, having fallen in love with the Eden and the Eamont on fishing trips made when he was a young man.

A lifetime member of Yorkshire Fly Fishing Club, Bob’s conservation activities have focused on stopping pollution from agricultural and wastewater treatment plants and preventing over-abstraction of water from the river.

Dave Haig, a fishing colleague said:
“Bob’s never been afraid to take on the big guns who run the local wastewater plants or industries if he felt they needed to change their ways – indeed anyone causing pollution.

“He knows his subject thoroughly, and always gains the respect and admiration of his adversaries. He questions with quiet confidence and consummate ease and in a very polished, articulate manner. On top of that, he’s a thoroughly nice, genuine bloke.“

One of Bob’s proudest achievements is the hard-fought campaign to upgrade the sewage system in Penrith.  Throughout the 1990s, there was growing concern about the pollution from wastewater entering the Eamont, particularly the poor state of the pipe bridge that at that time went over the river at Frenchfield.

In 2006 the pipe burst, pouring raw sewage into the river. Bob led the legal efforts to force the polluters to pay compensation for the damage. Despite the loss of the court case, he went on to gain considerable public support through extensive media coverage. As a result, the water company eventually agreed to renovate the town’s sewage system. As Bob noted, “We lost the battle but won the war!”

Bob is 89 years’ old now and still puts in a huge amount of time working to keep his beloved Eden free from pollution.

Bob has worked tirelessly for the preservation and promotion of the Eden and its tributaries for many years. His polite, intelligent, articulate and tenacious approach when trying to find solutions to pollution problems is well respected by all parties, as is his thorough knowledge of the river. We thank Bob for all he has done and continues to do for Eden’s rivers. He is a worthy winner of the Ploughlands Legacy Award.

I am most grateful for this prestigious award and we still have much to do!  And we are fortunate to have Eden Rivers Trust who work so hard to continue to conserve our rivers in the catchment.

Do you know an unsung hero (or heroine!) who is passionate about caring for Eden’s rivers and lakes and has undertaken valuable work to improve or protect them? Nominate them for next year’s Ploughlands Legacy Award by emailing us at office@edenrt.org with their details and a short paragraph about what they have done for Eden’s rivers!